After the days in which Adam and Eve no longer walked and talked personally with God in the Garden of Eden, one man has pointed to another to “that God” down through the generations. “O earth, earth, earth, hear the word of the Lord.” Jer. 22:29. “I have heard of thee by the hearing of the ear,” Job declared. As it was in 1520 B.C., so it is now. We hear of God by the hearing of the ear. Still the question is repeated, “Who is that God?” Man answers to man about God. Those who know Him best proclaim His greatness. But God Himself has not remained silent. He has spoken time and again about Himself to us. There is no voice where He is not heard, the sound has gone out unto the ends of the world.

Prior to the knowledge of writing, stories were handed down by word of mouth. Those who stood at the fires, in the evenings relating these stories, were known as “mages.” The stories made images in the minds of the listeners. The world would like us to believe that many, if not all, of the stories of the God of old were stories of imaginations. “Who is that God, the world inquires, who could do these things: speak from a burning bush that was never consumed; lead over a million people across the wind-dried Red Sea bed; protect three men in a furnace, heated extra hot, so they were not burned; and close the lions’ mouths at feeding time? Who is that God who directed a small stone from a sling to a tiny opening on the far stream bank. Who is that God who would do such a thing, or who is that God who could do such a thing? Is He real?” The skeptic and unbelieving say these things are contrary to nature. Of course, the God who created nature can do with nature as He pleases. He is that God.

When Ahab was king, false prophets abounded causing people to worship gods of stone and wood. Idols were carved and covered with a thin sheet of gold which glistened in the sun. It was so easy and convenient to worship the gods of wood and stone, for the idols didn’t make demands on one. It was easy to pay homage and go about one’s way. It took just a few minutes of bowing before the idol and dropping coins in a bowl. Why be bothered thinking about a living God? After all, what would He demand of one–the elimination of pride and self in the heart-holiness? So, it was much “safer” and convenient spending a few minutes with a stone god who didn’t talk. And so the social conscious mind found it impossible to conceive a living God.

Such was the social and moral consciousness of Egypt when Pharaoh was faced with Moses and Aaron. “And Pharaoh said, Who is the Lord, that I should obey his voice to let Israel go? I know not the Lord. . . .” Ex. 5:2. Can you hear the sneering pride, arrogance, and disdain in Pharaoh’s words?

But Moses already knew the Lord. Hadn’t God revealed Himself to Moses in the burning bush which burned, but was not consumed? How could Moses doubt a God like that? Had not God spoken from that bush declaring, “I AM THAT I AM.” Look closely at that statement-it contains a mathematical verity-I AM equals I AM. “God is His own equivalent, and God needs nothing but Himself to achieve the great purposes on which He has set His heart.”-Taken from Springs In The Valley. Did God then need Pharaoh to ask, “Who is that God?” God would and could do as He pleaded without asking leave of Pharaoh. Nor do we find Moses upholding God as having any particular quality that the king could identify with. Either his language didn’t hold such words, or Moses knew whatever he might say about God would be lost on the Egyptian mind. However, since the Egyptians were using math in a greater and higher degree than the other nations around them, maybe Pharaoh understood the equation of God’s statement better than we think he did. Since Pharaoh considered himself a god, some shepherd declaring “I AM THAT I AM has sent me,” bordered on sheer treachery.

Moses declared, “The God of the Hebrews hath met with us.” (Ex. 5:3). Because God had previously met with Moses, and Moses knew God, he proclaimed, “God is. God is the Great I AM.” God spoke “unto Moses, and said unto him, I am the Lord: And I appeared unto Abraham, unto Isaac, and unto Jacob, by the name of God Almighty, but by my name JEHOVAH was I not known to them.” Ex. 6:2-3. “Now shalt thou see what I will do to Pharaoh.” (Ex. 6:1). Jehovah means “Creator” and “Eternal” of which God is both.

By the time God delivered Israel out of Egypt, all nations round about had heard of God. They may not have had telegraphs, nor the evening news on television, but they had heard. It brought fear to their hearts whenever the Israelites approached their borders. They knew who God was, even if they didn’t know Him on a personal basis. In other words, here was a God who dealt directly with humans, and as such, He deserved respect.

King Solomon’s prayer in 1004 B.C., as recorded in II Chronicles 6:14 says, “O Lord God of Israel, there is no God like thee in the heaven, nor in the earth; which keepest covenant and shewest mercy unto thy servants, that walk before thee with all their hearts:” Solomon witnessed the dealings of God with his father David, and to him, that God was real and living.

When Elijah demanded Ahab to bring the priests of Baal to Mount Carmel, he felt that he alone was the only prophet left to fight for God. It was approximately 906 B.C. It has been said that one soul on fire for God can set the universe ablaze. Listen to Elijah’s dramatic appeal to the idol worshipers: “The God that answers by fire, let him be God.” When fire fell from heaven, consuming the water-soaked wood and sacrifice, doubts were burnt up as well as the water. The people proclaimed, “The Lord He is God! The Lord He is God!” They knew who that God was.

Hear the voice of the prophet Jeremiah praying, “Ah, Lord God! behold, thou hast made the heaven and the earth by thy great power and stretched out arm, and there is nothing too hard for thee: Thou shewest lovingkindness unto thousands, . . . the Great, the Mighty God, the Lord of hosts, is his name, Great in counsel, and mighty in work: for thine eyes are open upon all the ways of the sons of men: to give every one according to his ways, and according to the fruit of his doings:” Jer. 32:17-19.

“Who is that God that I may know Him?” the young people of our nation are asking today. Will Christians, as Daniel and others before us, have to go through great trials before they are willing to listen about that God? People asked about Christ when He preached in Israel and Judah. “And there were certain Greeks among them that came up to worship at the feast: The same came therefore to Philip, which was of Bethsaida of Galilee, and desired him, saying, Sir, we would see Jesus.” John 12:20-21. Since this was very near the time of Christ’s crucifixion, they probably saw the event, may have heard Christ cry, “My God! My God!”, witnessed the darkness, felt the earthquake, and heard the railings of the Jews: “Save thyself.” “If thou be the Son of God come down.” “Himself He cannot save.” “Let Him come down.” “He trusted in God.” “If He will have Him.” All was summed up by the Roman centurion: “Truly this was THE SON OF GOD.”

The risen Lord is that “King of kings, Lord of lords,” God Almighty, Eternal Father, Creator of all the earth, Saviour, Shield, Buckler, Strength, Light, Salvation, Comforter, Sanctifier, Keeper, and much much more. The answer to the question, “Who is that God?” can be found in its depth and entirety when you seek Him with your entire being and desire, for He will be found of you as He promised.

Author: S.E. Abbott We hear much about the alarming increase of sin, but less as… 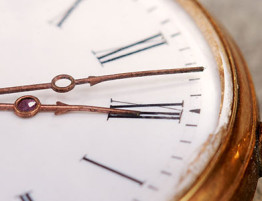